For us, Zayn has really been hit or miss lately. It’s not that we haven’t enjoyed his tracks, it’s just we don’t find ourselves going back to them like we did with “Pillowtalk”. “Let Me” could be an exception to that, it sounds like the perfect summer song.

Zayn has definitely been improving his vocals and while this track doesn’t showcase it all, you can tell the difference. The video is a continuation of his Sia assisted, “Dusk Till Dawn”, which again ends with “to be continued..” to end the video.

We still absolutely love everything about Zayn, and we can’t wait to hear more of this era!!

Zayn has definitely carved a lane of his own since his One Direction departure, and now he gives us some new music featuring PARTYNEXTDOOR, “Still Got Time”.

“Still Got Time” is definitely made for the summer with the heavy drum production and almost tropical feel. It is the perfect track for him, but I don’t see it doing wonders like “Pillowtalk” did. I was expecting a little bit more since I feel like these two artists are the perfect blend, but I’ll take it.

I’ll jam to it, but it’s not life changing. Who knows, it definitely has potential to grow on me for sure.

This unexpected collaboration came to light last night, and then recently after dropped, and is now taking over the airwaves.

The unlikely collab of Taylor Swift and Zayn for the new Fifty Shades movie has just dropped, and it is amazing. “I Don’t Wanna Live Forever” is written by Taylor herself, but the production is definitely down Zayn’s alley. There are times when Zayn’s vocals sounds a lot like Gallant. It’s moody, sexy, and just all around a dark sounding track. It’s pop perfection for the end of 2016.

The most surprising factor on this song is how much both of their vocals have improved since we last heard them. I have never really been a fan of Taylor but this gives me some hope on the release of new music.

Anyway, take a listen below!

For me, Snakehips has produced smash after smash. Whether it be the Zayn assisted, “Cruel” to the Chance The Rapper and Tinashe smash, “All My Friends“. This time they introduce us to some fresh new talent, Aanysa, who after watching the video will be someone I do some research on.

“Burn Break Crash” definitely has some summer 90’s vibes to it, but its definitely a track that I will have on repeat for quite some time. I can’t wait to hear what Snakehips churns out next, because I have yet to be disappointed! 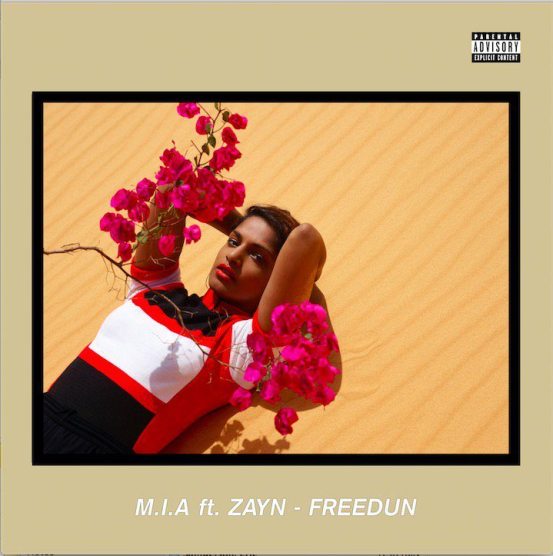 This might be one of my favorite collaborations of the year. M.I.A is bringing out the big guns for what may be her last album, this time with a track titled “Freedun” featuring the incredible Zayn.

This track might be her most mainstream track off the album. Zayn adds his trademark haunting falsetto which gives this track a more soothing feel. M.I.A has always been known for some hard hitting tracks but this gives her a different side.

Head over to The Fader to hear this track!

This track has been a slow and steady banger for me. I really wasn’t a fan for quite some time, seeing as Zayn‘s album was pretty much a flop. The talented producer, Snakehips, has given some life back into his career for me at least. My only problem was that his album was just one blend of a track, there was no story, there was no differences. This gives him some change up in his sound, and I quite actually prefer this.

In other news, MIA has announced a collaboration with him, which I believe could be quite iconic when the time comes seeing as it is her last album. Anyway, enjoy the video for the Snakehips and Zayn collaboration!